The enchanting Cayman Islands lie just 480 miles south of Miami. Grand Cayman is the largest of the three islands and supports almost the entire population. The Cayman Islands are a British overseas territory and attract a large number of ex-patriots who both live and work on Grand Cayman. As the fifth largest finance centre in the world, the economy thrives as a centre for offshore finance as well as a booming tourist industry. Caymanians enjoy a zero tax environment and the highest standard of living in the entire Caribbean, supported by a strong and stable economic, political and social structure. Travel to Cayman is even easier than before with ten airlines including British Airways flying direct from UK and nine US gateway cities, including Miami, which is only an hour away. The Sister Islands, Jamaica and Cuba are also easily accessed from Grand Cayman. 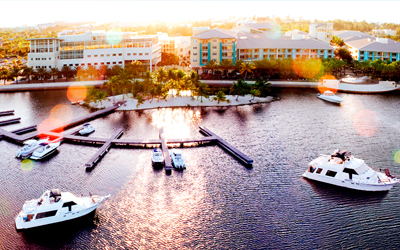 The lively town of Camana Bay spans 500 acres from Grand Cayman’s famous Seven Mile Beach to the tranquil North Sound. Based on the principles of New Urbanism, the Town is designed to be pedestrian-friendly with beautifully landscaped walkways and bike paths throughout. Lush gardens, courtyards and parks act as the perfect complement to the town’s sleek, Caribbean-inspired architecture.